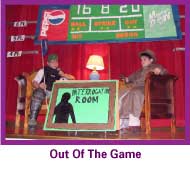 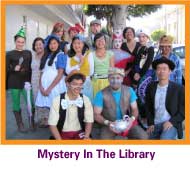 Most of these school mystery party kits contain teacher’s notes. These are additional exercises to give the class either during the classroom activity or for homework. Some also contain a page for students to use to keep track of things during the event. Click here to see a sample of the teacher’s notes for Mystery In The Library.

Feedback on our school mystery games from teachers and librarians

In 2014, a school in Kentucky purchased 8 mystery party games from us. When I asked the Principal for some feedback a year later, this is what she said:

“Thank you for contacting us to check in. We had a really good time with the mysteries. We really liked the Who Stole the Cookies and the Clown Caper one, staff, students, parents had a blast. We were featured in the Kentucky standard the following week which is our local newspaper. I have recommended to other schools that if they are looking for this type of event they should contact you.
Thanks,
Shelley Badgett
New Haven School Principal”

“I got The Hunt and performed it with 3,4, and 5th graders as part of a club program we do on early dismissal days. They loved it and it really uses problem solving and thinking skills and it’s fun! what more could you ask? thank you. It’s actually the second I’ve used, I like them so much.”

We are in the process of using these in class now and they love them!!!!

“We had a fantastic time with our 8th grade middleschoolers. It was a bonding and team building time and this wonderful game brought incredible memories and fantastic anticipation for more of these mystery games to come. I had college kids help with cooking and decorations and now they’re asking when it’s their turn to play. Thank you for an unforgettable evening!!!

The kids and parents still talk about that “magical” evening!

Thank you very much!!

The value of mystery classroom games for readers theater?

At Merri Mysteries we have designed our mystery party games kits so that they are educational, fun and mentally challenging yet solvable. All our kits are good, clean family fun. Some are murder mysteries, but many are mysteries but no murders. They provide students with an opportunity to use their dramatic skills and problem solving skills.

The organizer for a party using Mystery In The Library for a school group of students in Joplin, Missouri, USA (a parent and former school teacher) sent the following feedback:

“It was not until we were in high gear with it that I came to realize how dynamic it was. It integrated several more essential skills than I was aware of (reading, analytical thinking, acting, imagination, pattern recognition, team work, to name a few). I feel that drama has a definite place in curriculum design, since it calls on both the left and right brain.”

At another school in the US, Terri Lawler, a teacher who helped organize a similar event for 30 children, wrote:

“The dinner was a fabulous success!! We did one act per hour. The parents decorated four rooms (forest, castle, spooky, library) and you would not believe how they looked! The kids were stunned because it didn’t even look like classrooms. The kids were allowed to come late to school dressed and in character. We were on the TV news! We served an appetizer the first hour, salad, the second hour, entree the third hour, and dessert the fourth. The parents were waitresses and waiters and the kids were served sitting down. We had a bell to ring when Sherlock was getting ready to ask a question. Thank you for all your help. It was awesome!”

The educational philosophy behind our games

Our school mystery party games develop problem solving abilities and drama skills and they also look at the big question of what motivates people to do what they do.

Students have to use their reasoning abilities to weigh up all the clues and to decide what is important and what isn’t (e.g., what is a red herring).

Students bring with them certain paradigms of reality. For example, some might assume that males are more likely to commit crimes. But our kits get them to rethink their assumptions. Students also have to realize that people don’t always tell the truth. So just because something has been said or overheard doesn’t mean it is necessarily true. The game provides a natural learning environment that arouses their curiosity.

As teacher, it is your responsibility to explain that they will assessed not just by their answer because they may have just guessed who did it. They will be assessed by the way they gathered information, how they ruled out suspects for various reasons and their reasoning for deciding on the person they have chosen as the one who committed the crime.

Because a mystery party game is such a different format to the way in which they normally learn, it fosters their development of adaptive learning rather than routine/rote learning.

They themselves choose the road of inquiry to take. They decide which clues to focus on and who to talk to (in the meet and mingle formatted kits).

The mystery game can develop critical thinking abilities as follows:

The aim is to try to get the students to develop understanding and to make sense of what they are learning. They need to create meaning and to develop their own ideas in relation to it.

If they take a surface approach their aim will be to just work out who did it with a minimum of effort on their part and as little involvement as possible. Often they will try and guess rather than working out how and why the person did it.

They often have a negative attitude to learning. But because the game is fun, they can often forget to be negative. They, like everyone in the class, often gets engrossed and enjoys the experience and they let their natural curiosity take over.

There is nothing in the game that can be simply rote learned and regurgitated, so they are forced to take a different approach. 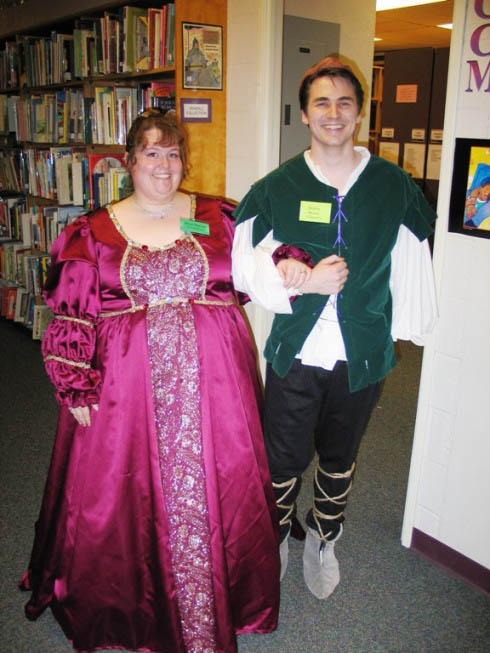 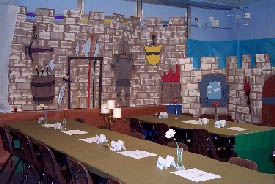 A classroom decorated for a readers theater activity

What can you do as the teacher or librarian?

To encourage deep learning, we recommend that you reward their process not just the final answer they give. Give them feedback on their progress. Get them to focus on a few things rather than too much.

Discussions before the game: Get the students to discuss the deeper meaning behind such mysteries such as “why do people kill or steal or behave badly” etc? What are their motives? Discuss whether such motives really justify such acts (especially in the case of murder). Are the people who do such things thinking clearly or are they a little crazy?

How should they look critically at what takes place during the game? How can they detach themselves from the emotional aspects and looks at facts? How can their assumptions mislead them? How can you recognise a red herring? Once they know more details about the crime, how can they use this information to rule out certain suspects?

Discussions after the game: Ask them if they can relate to the emotions of the people in the game? Have they ever felt that way? How did they cope with the emotion rather than act on it? Discuss why some suspects may have thought about committing the crime and even planned how they were going to do it but not actually done it. Discuss what led them to make the wrong conclusion. Discuss what logic they could have used to arrive at the correct solution.

Organizational skills: Get them to suggest ways to organize the facts they find out before they start. You may like to present some possible ways to organize information such as mind mapping etc. Developing their own chart to use during the game will help develop their executive function skills. Do they have somewhere to write down the motives of the suspect with relation to the victim? Where will they write down any plans the suspect had or suspicious things they did? How will they note on their chart that they have ruled out a suspect and where will they write down the reason for ruling them out?

Time management: How are they going to spend their time during the party? Get them to work out the most effective strategies in terms of using their time.

Educational aspects of our mystery activities

If you would like to pay for a mystery game using a school purchase order, please Contact Us.

Generally in our mystery party games, we cover some aspect of history or culture. For example: